2.45pm I scowl the airport for the right balance of culinary excellence and economic frugality. Having just received a text from the Gaffer proclaiming the food in Portugal to be both excellent and cheap (having just had a three course lunch for 7 euros), I wanted to start the tour with a flourish myself. After dismissing the seafood bar (half a dozen oysters for £12 – tempting but too risky) and McDonalds (ahem) I settled for EST. The quality of any mysteriously acronymic restaurant in Spring can be measured by the quality of its Caesar salad, and this mixture of dry anchovies, stale croutons and mountains of parmesan cheese spoiled the otherwise tasty sauce and leaves. Disappointed that my diary had got off to a less than invigorating start, I trudged off to catch the plane. At least when I met Damo just before the flight (not knowing that each other were on the same flight together, hopefully not symbolising a future relationship of miscommunication between the Gafferino and his assistant) a guilty grin spread over the Welshman’s face as he explained that again, his first meal of a tour was from Garfunkels. I felt the Gaffer turning in his siesta.

3.30pm On the plane. Dry chicken escalope on a brown roll followed by chocolate mousse and a single Twix, or a Twik, if you like. The part of me that indulges in crap food every now and again enjoyed the plasticky mousse and tasteless cream but I was still looking forward to Lisbon, not really knowing what was going to be on offer when I got there. I learned later that Damo didn’t eat his mousse but, as we were sitting away from each other on the plane, I couldn’t take advantage of his refusal by saying to him “Don’t you want that? Can I have it?”, thus cobbling together some of my favourite words in the English language and enjoying seconds.

9.30pm Barrio Alto. The Soho of Lisbon was where I ate the first proper meal of the trip. A congested area of restaurants and nightspots, Barrio Alto would remain a favourite haunt of the team in gastronomic and inebriated contexts alike. I asked our excellent guide, Carlos, what to have, and he recommended a fish called dorada. It was sumptuous, not too delicate and with a strong taste. I imagine this one put up a hell of a fight before the fishermen finally overcame it. Swordfish was the other main course that people plumped for and though they seemed to enjoy it, I was sure I had made the best decision. So far so good. After the meal, a few jaded faces went home to rest for the coming match the next day, which left the new boys in town to continue for a night cap. I don’t know what we had but the bar was an amazing recollection of Christopher Isherwood-style war memorabilia and soft, velvety sofas. As Portugal was neutral in the war it was if a collection of Portuguese Sally Bowleses had plied their trade on German and British soldiers and asked for some memorabilia in return; the collection of helmets, medals and assorted war paraphernalia was truly remarkable.

Breakfast A mixture of cereal, ham, cheese and a boiled egg. The simple joy of a boiled egg cannot be understated. I will always remember the look of horror a friend of mine gave me when I ordered a pizza and asked for a boiled egg, quartered, to be put on the topping. “Egg on a pizza? Are you crazy?” Perhaps he was right, but I’ll never turn down the offer of one.

12.30pm Benfica’s Estadio da Luz. After a turbulent tour of the stadium where I was confronted with an eagle and the realisation that I had lost my phone in the Home dugout (again, hopefully not a foreboding metaphor for lack of communication in future dugouts), the team ate in the oxymoronic ‘Beer Cathedral’. It turned out to be neither a place of worship or a brewery but a nice eatery in the heart of the stadium. Bearing in mind our match against CIF (whose ancestors we had seen playing Benfica in pictures in their trophy room), was only hours away, there were questionable decisions concerning the pre-match meal. The sensible ones in the team had pasta, but there was a steak dish being eaten by at least one of our front line and Owen, not content with what he had ordered, proceeded to devour Tamber’s soup when it had been placed in front of him by mistake. “Couldn’t you tell it wasn’t yours?” an exasperated and by this time famished Tamber asked Owen. “I thought it tasted funny, yeah” was his meagre reply.

9.30pm After the resounding 5-1 defeat by CIF, the team were licking their wounds in a nice restaurant round the corner from our hotel (soon to be dubbed ‘Eusebio’s’) that the team had found the night before. The first gastronomic split in the trip came here however when the menus came out and half the team walked out. I think they missed out however because the remainder of the team who stayed enjoyed a fine selection of meats (cut in front of us by the waiter) followed by sea bass. The beauty of Portuguese cuisine (with the very limited knowledge I amassed in Lisbon) is that the main dish is almost always accompanied by nice vegetables or salads. Although the food in Madrid was amazing, the ratio of meat to veg was astonishing and it was difficult to understand why Spaniards aren’t fatter than they are. The only downside to the meal was a Lisbon orange cake that tasted like an omelette with orange juice in it. Not nice at all but a unique experience all the same. On a different note, there was a heated but welcome debate about food in Britain. Mr Jamie Oliver was being simultaneously defended and slammed on the subject of his school dinner programme. One point of view was he is defending the health and nutrition of school-kids nationwide and the other was that he is a middle class twerp feeding the nation ideas that have gone against the working class diet which had boosted kids for decades. The discussion of food alongside the topic of class in the classroom is an interesting direction the team is moving towards more and more these days. 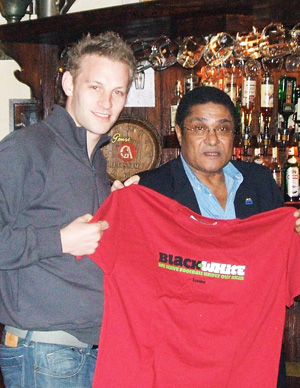 11.30am Lovely sandwiches and coffee al fresco with Clarkey, Ellie, Damo and the Gaffer. The trip was coming to an end but there were still two more meals to go. Before lunch, a quick stop for some more coffee and pasteis, a Portuguese custard tart that is a hugely popular local delicacy. This eagle-eyed reporter has since spied some in a Soho café and has been reliving Lisbon with every taste. Lunch was in the first floor of a restaurant looking onto a church, which was very apt given the day. More fish – calamari, dorada and some cod which again, accompanied with beautiful vegetables and salad, boosted the health levels of the portion of the squad who decided not to spend all day drinking (ahem). Although if it wasn’t for them, we would never have met Eusebio, but I’ll let that story be told by someone else.

9.00pm The last supper (come on, we were only a few days late) saw the whole squad reassemble together in various forms of chirpishness, inebriation and gastronomic satisfaction. Along with Carlos and Amelia and some of their Portuguese friends, we enjoyed a mix of all the previous days meals with myself enjoying two desserts, having chosen one then realised someone else’s looked better.

Lisbon showed that we can enjoy good local food at a very fair price. They are proud of their fish and meat dishes and I didn’t see many empty McDonalds wrappers lining the streets. In Britain we can all buy and eat locally produced food but there is still the issue of price, which was touched on quite rightly by Owen in the restaurant on Saturday. Only when we learn about the food culture of other countries, their expectations on how their food is produced and consumed, will we develop our own views on what we should expect and accept as part of our own food culture.