‘We lost the match but won the weekend’

To cement a positive year of team-building, it was fitting that Philosophy Football take a summer break to a European hot-spot. Thanks to Stefan’s superb organisation, 12 of us travelled to Zürich, cultural capital of Switzerland (eh Goober?) and fairness, for a weekend not to be forgotten. We played local veterans’ team FC Levante, whom we had the measure of and could have beaten, but once again the opposition’s greater organisation lost us the game. It was, however, an enjoyable game to play in, and while we lost the match, we most certainly won the weekend.

05:10 Simon rings Raj to check he is awake. Raj, in obvious hung-over pain, pleads with Simon not to shout. Ten minutes later, Simon and Cornish Al pull up to Raj’s Camden pad just in time to see a young lady escorted briskly out of the back door. ‘She just came round to chat’ protests Raj.

06:55 All finally assembled in Luton Airport’s luxurious departure lounge – the part that isn’t a building site – for a healthy early morning fry-up. It’s a big encouragement to see Prodigal Tom back in the fold.

08:05 After Goober finally gets on the plane, having looked in vain for a Duty Free shop while the airport staff repeatedly scream his name over the Tannoy, our Easyjet flight takes off. Rob the Cat admits to being petrified of flying. Pilot Bill Palmer fails to make untimely jokes about crashing. Goober embarrasses squad by pulling out BOAC Junior Jet Club log book circa 1973 for pilot to sign.

10:45 Driving from plane to terminal in the airport bus, Goober switches his phone on and complains of not being able to get a signal in Austria’. ‘You’re in Switzerland’ whispers someone urgently, to hostile glares from other passengers. Meet Stefan, host and tour guide supreme.

12:00 Stop at outdoor café for sausages and beer. Dive-bombed by squadrons of trained attack sparrows. Walk around old areas of this beautiful city. Visit a café which plays old soul and jazz. Due to table arrangements have to sit in 4-4-2 formation. This surely bodes well. Tom visits the loos, and a few minutes later a gorgeous brunette walks out. ‘Don’t he scrub up well’, remarks Al. Paul runs off to collect our Geneva signing, Barry.

15:10 (notice continental-style ‘24 hour’ clock!) Get to Sports Bar, specially set up for this tournament. Meet some of our hosts, who prove to be very kind. They also speak English, which is a relief to these parochial Londoners. The rest of the evening we variously entered bars, left bars, entered other bars and left bars. I think.

23:00 One event worth mentioning is when Raj, Cornish Al and Rob the Cat returned back to Silvano’s flat in the commune, where they were staying. Someone they didn’t recognise was sitting on the sofa, and Al introduced them all as friends of Silvano, while Rob went off to make a cuppa and Raj hit the bedroom. This chap looked a little perplexed, then Al spotted a piano – ‘I’m sure that wasn’t there before ... Lads! We’re in the wrong flat!'

12:00 Meet for training session. Abandon that idea to go for coffee, cakes and ‘tactical talk’ instead. Gaffer Geoff introduces three killer moves for corners and free kicks. Everyone agreed on who does what and which hand signals Al will use.

12:45 Training session. All going well, silky skills in evidence. Tactical moves looking good. Goober tells Geoff ten minutes before kick-off that he injured himself in a midweek match, not so good. Still just about running, though.

13:30–15:00 Beaten 0-4 by an older team. It shouldn’t have happened this way! Geoff scuppers our best chance, tactical move number 2 from a Cornish Al corner, when he heads the ball away from Paul, who was steaming in at the back stick. His defence: “I wasn’t wearing my glasses, lads!”

15:00 Walk off, somewhat dejected. Try to buy beer but are refused as the opposition have just bought us several crates of beer themselves. The evening starts here! Geoff makes a stirring speech on European unity to the massed TV crews, and we exchange shirts with the tournament organisers for a set of superb orange and sky blue Clandestino shirts, destined to become our away strip. We then veer from bar to bar with our hosts, watching matches in various settings, the best being a bar underneath the arches of one of the city’s bridges, with sizzling sausages ever near. Tony speaks German with increasing success with every drink, Danny and Geoff look ever more continental, Tom’s jokes get more bizarre, Cornish Al tries his hand at ‘entente cordiale’ with the locals (a.k.a. Lisa the air stewardess), Goober smashes a tooth without realising, Big Jens attempts to drink us all under the table before driving home.

01:30 Sitting in the only bar we can find, with Al singing the famous Sinatra number ‘Zürich, Zürich’ at the top of his voice, then joining Raj in a rendition of ‘Danny Boy’. Having been convinced by Jens that nothing is open, we make our various ways home. But not Raj and Al! They commandeer a taxi, and in their broadest Ulster/Cornish accents demand to be taken to the nearest nightclub. Refused entry in their Philosophy training tops, they strip down to their Clandestino tops and are allowed in. Both try for some more entente – perhaps even detente, if some stories are to be believed. Then back to the commune. Al goes for the light switch but instead rings the doorbell of the chap whose flat they walked into the night before – who then chases them up the stairs.

10:30 Meet in Central Station café, most swigging water vigorously, Goober with red lizard eyes, Raj with eyes firmly shut. Say farewell to our hosts and make our way back to the airport. Simon apparently given a full body cavity search, at least by the length of time spent in the cubicle and the scowl on his face.

3:00 (back to 12 hour clock, thank goodness) We arrive home to waiting TV cameras, only to find that they are filming a rather haggard-looking Mike Read – ‘Oh Pat!’ – rather than us.

So that was Zürich, at least as far as this hack’s admittedly hazy memory of it goes. Send all complaints re poor recall of facts to Kronenbourg Ltd. Big thanks once again to club supremo Geoff for getting the tour off the ground, to tour supremo Stefan for fantastic organisation, to everyone in the squad for making it a great weekend, especially to the Raj and Cornish double act for wall-to-wall entertainment, and last but by no means least to our wonderfully kind hosts. Here’s to a return match in London in June 2001!

Next tours planned: ‘Ich spiel ein Berliner’, and our very own Prague Spring. 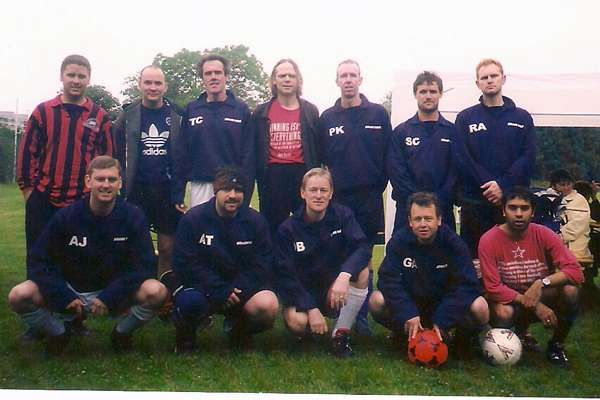 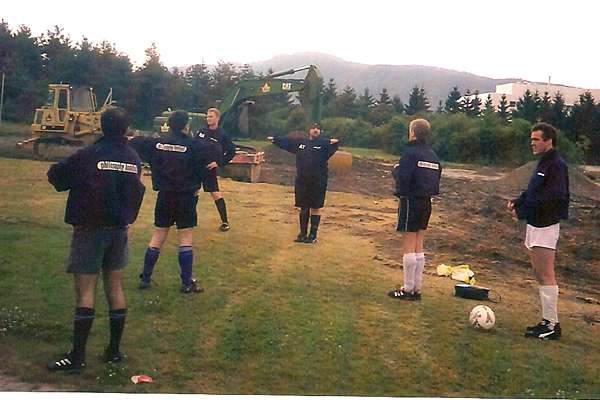 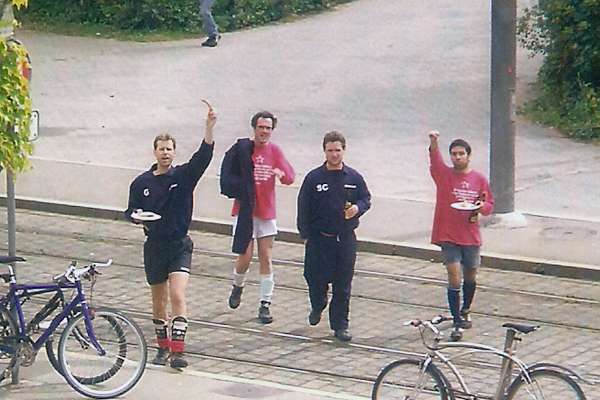 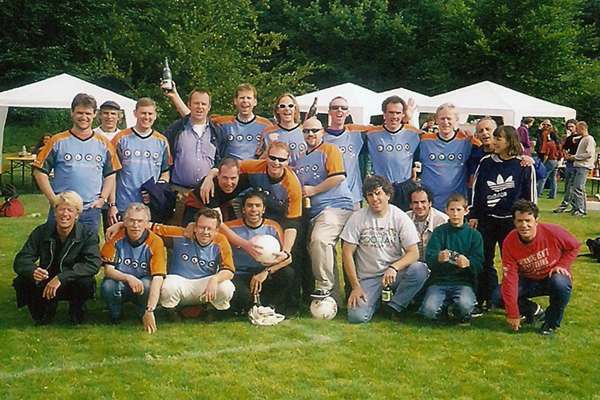