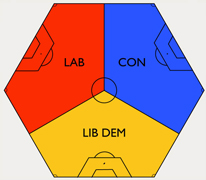 To coincide with the election campaign, and to explore the possibilities of a tripartite, consensual approach in both politics and football, Philosophy Football FC is organising a three-sided football match in conjunction with Whitechapel Gallery.

Three-sided football was conceived by Situationist thinker Asger Jorn, who saw it as a means of conveying his notion of 'triolectics': a trinitarian replacement for the binary structure of dialectics. It has been tried in practice a few times in the years since, with varying results.

This match has been proposed by Whitechapel Gallery's 'writer in residence', Sally O'Reilly, as an event in which the three teams involved represent each of the main political parties and play to win the ideological argument.

PFFC will represent Labour, playing in red as usual. It will be interesting to see whether the match will reflect the current opinion polls, and whether the team in yellow is left behind or manages to replicate the recent surge in popularity of the Lib Dems. Can we show the political leaders, through a new form of football, the way to a more consensual, representative form of politics?

Taking this too seriously probably misunderstands the nature of Situationist art. As long as the three teams sign up to the five rules (below), this should enormous fun and a philosophical challenge to the view that politics is boring. Perhaps three-sided football is the true 'art of politics'.

There are photos from the event on the Whitechapel Gallery site.

Read the minute-by-minute match report, sent from the touchline by Ally and compiled by Filippo, by clicking here.

The match received press coverage from both the Hackney Gazette (page 9) and Enfield Independent.

1. Scoring
A team does not count the goals it scores, only the goals it concedes. The winner is the team that concedes the fewest goals.
2. Throw-ins / goal-kicks / corners
On the hexagonal pitch, each team has two sides of the six-sided pitch: the side with the goal (the 'backside') and the side opposite to your goal (the 'frontside'). If the ball goes out on one of your two sides, you get the throw-in / goal-kick. If it went out off you, the throw-in or corner goes to the team whose own goal is nearest to where the ball went out.
3. Referees
While there is a temptation to have no referees with the following dictat in mind: 'The game deconstructs the mythic bi-polar structure of conventional football, where an us-and-them struggle mediated by the referee mimics the way the media and the state pose themselves as "neutral" elements in the class struggle', the match will have two referees, able to make discerning philosophical judgements.
4. Duration of match
Ideally, teams will play until people get bored, start to wander off, fall asleep etc: however, three thirty-minute 'halves' with teams rotating goals would work well
5. Other rules
There will be no off-sides. There will be rolling subs, rush goalies etc.

Before the match, the Gaffer proposed the following 'situations' to reflect the absurdist Situationist nature of the contest.
True to the situationist philosophy which inspired three-sided football, and in order to make an effective artistic impression, I would like to open a discussion on what situations and experiments we may construct on the pitch, apart from more accurate passing obviously. Our shirts, of course, will challenge the cultural vacuousness and consumerist obsessions of late capitalist society, but beyond that we might like to consider:
– A sit down in front of Owen's goal following any Tory-Lib Dem pact.
– Complete silence on the pitch, with passer and recipient communicating by hand signals only (a bad habit for the Grafton League but anyway...).
– Two players sitting down playing cards while game is in progress. This would illustrate the contempt for the competitive nature of modern society. (A game of conkers would be better, but wrong season. Unlucky!)
– One player in each third wandering round aimlessly, scratching head and looking 'philosophical'. This could be good art-philosophy.
– The goalkeeper, wearing the Camus shirt, will smoke Gauloises in the French philosophical tradition.
– One of the referees have his head in a book or the Sunday papers, and the other listening to a portable radio.
– Other, 'improvised'' situations will be welcomed.

Players also handed out these 'Vote PFFC' flyers in order to challenge the corporate bi-polar hegemony of the opposition, perplexing players and frustrating any anti-Labour coalition moves.