A gastronomic heritage from the Lancashire heartland 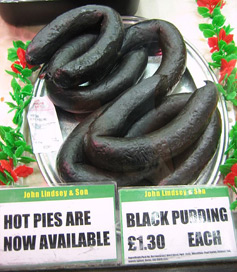 Black pudding, also known as blood pudding, is a sausage made by cooking blood combined with a filler until it is thick enough to congeal when cooled. Pig’s blood is most commonly used and typical fillers include meat, fat, suet, bread, barley and oatmeal. The Germans call it Blutwurst; the French, boudin noir; in Czech it is known as jelito; and the Spanish refer to it as morcilla.

This delicacy has been the centrepiece of Philosophy Football's post-match meal at Meson Bilbao for a number of years now, and it never fails to disappoint. Black pudding is usually served as part of a traditional English breakfast and it is in Lancashire town of Bury that black pudding has its roots. Speaking as an exiled Lancastrian myself, this is an object of immense pride. The most noted black-pudding outlet in Bury has to be Chadwick's Black Pudding Company, where asking simply for ‘black pudding’ isn't good enough – you need to know the language of black pudding. A 'lean' buys you black pudding without the fat, a 'two' is a string of two puddings, a 'four' a string of four puddings and a 'six' is for special celebrations! 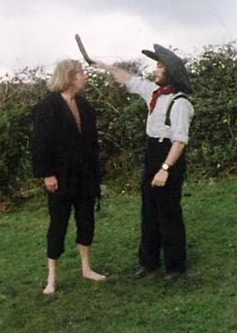 Just a few miles from this epicentre of black pudding is the town of Ramsbottom, which hosts the annual World Black Pudding Throwing Championships. This event provides good, clean, cultural and fair fun for all the family. The general idea is to launch the black pudding at a heap of rival Yorkshire puddings, perched 20ft high on a wall; the victor is the individual who dislodges the greatest volume of Yorkshires with three throws. A campaign to get this recognised as an Olympic sport in time for London 2012 is about to be launched.

However, it is not only in northern England that black pudding is popular; there are ancient references to them. For example, in Homer's Odyssey, we read:

"As when a man besides a great fire has filled a sausage with fat and blood and turns it this way and that and is very eager to get it quickly roasted ..."

Homer also makes reference in the Iliad to when the Greek general Agamemnon was said to have fed his army on blood and onions, a powerful source of iron, protein, carbohydrates and sugars. Although this is not recommended as a pre-match meal I can only assume Homer, like myself, was a fan.